Oh my word!  I have been such a worker bee in terms of my dollhouse progress!  My miniature projects are coming together.  I am seeing progress almost on a daily basis and it is so exciting!

So today we are going to talk about the Stonehouse Quilt Shop.  The last time I checked in on this progress I was still working on putting up the stone on the outside walls. But boy oh boy has more happened since then.

I decided that an old stone house definitely needed to have hard wood floors.  So I jumped back into laying my flooring in the house.  I again chose to do craft sticks (akin to a popsicle stick) to lay my floor.  It was/is tedious work. Once the flooring was laid, I immediately set about for the next step.  What was the next step?   The sanding process.   I learned very early on that the craft stick method works great...but will not look realistic until it has been sanded. So out came the sandpaper! 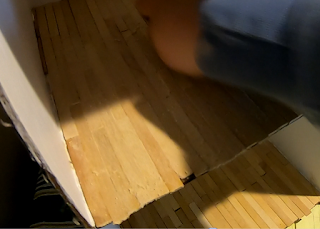 You can see the difference in appearance between the floor that I was sanding and the unsanded floor below.  It makes a HUGE difference and is a step you do NOT want to skip! 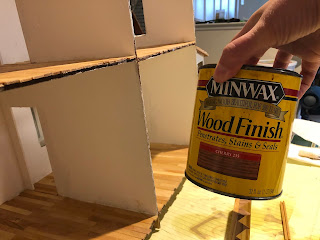 Once again when I finished that step I didn't slow down one bit. I pulled out my stains and I got to work!  I started with a pre-stain and then decided upon a Cherry stain.  It looks fantastic! 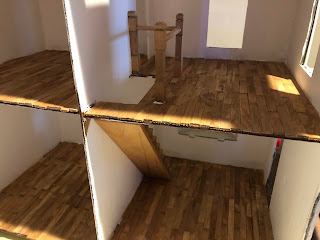 Next up was the steps.  I was lucky in that I had purchased a set of stairs years earlier.  I had actually  purchased them for the log cabin project...but that house was not at all scale, so the stairs just sat in storage....until now!
I immediately turned to the trim work.  I first had to recreate a few pieces that were missing when I purchased this house.  Not a problem....a little bit of glue and some pieces of wood and I was in business. 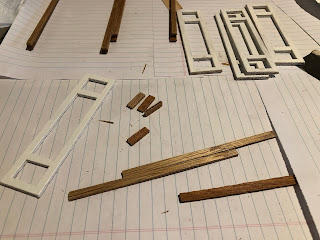 Paint was also needed. So that was a quick fix also!

I was so excited to hang my shutters and ran into a problem.  I should have put the shutters up before the stone due to the difficulty of gluing the shutters to the uneven stone surface.  I had to go to the drawing board and really think. 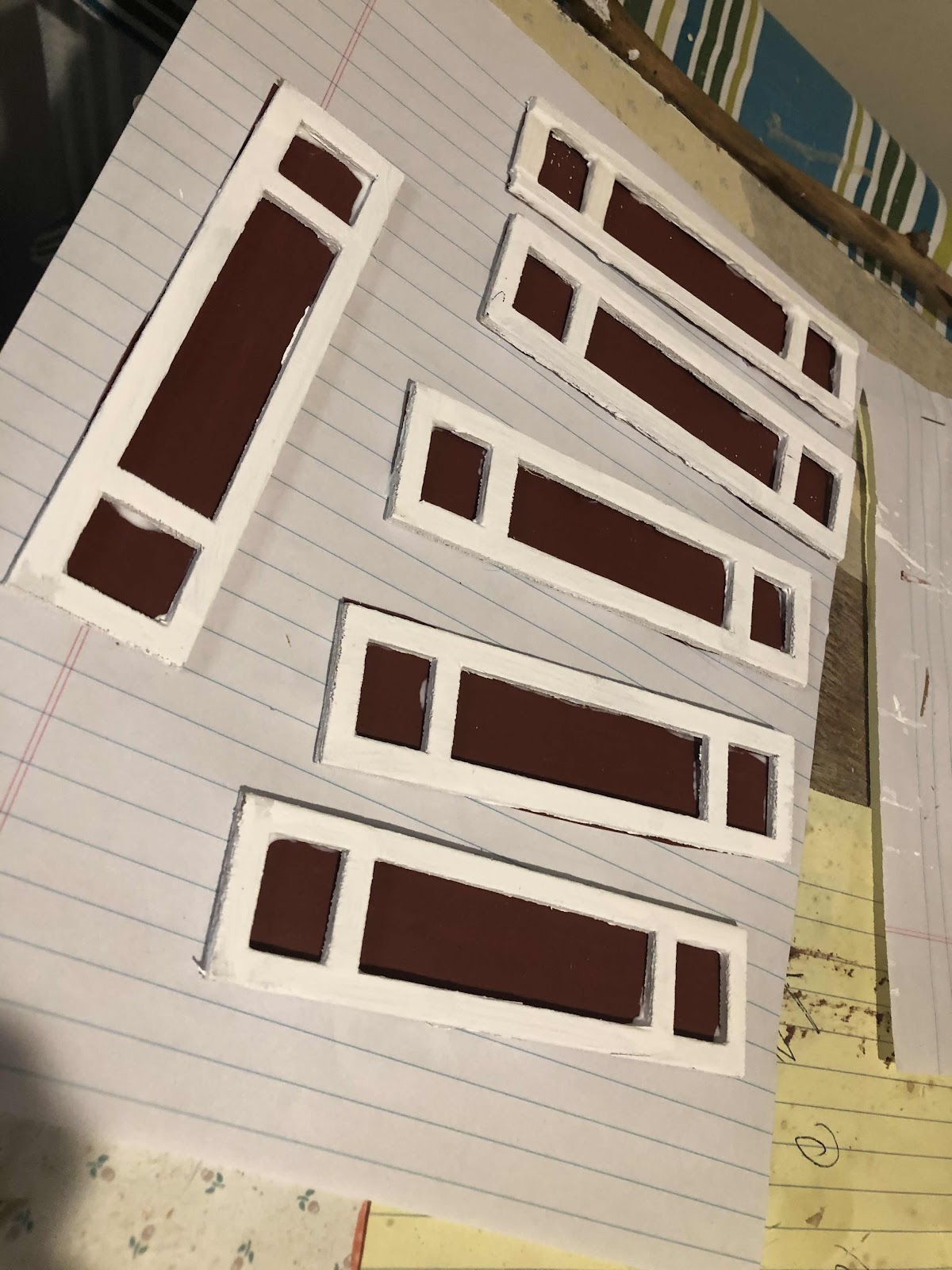 I did the only thing I could. I decided to make simple hinges out of Q-tips and posterboard!  I crossed my fingers and hoped that they would work.  But first I needed to paint them! 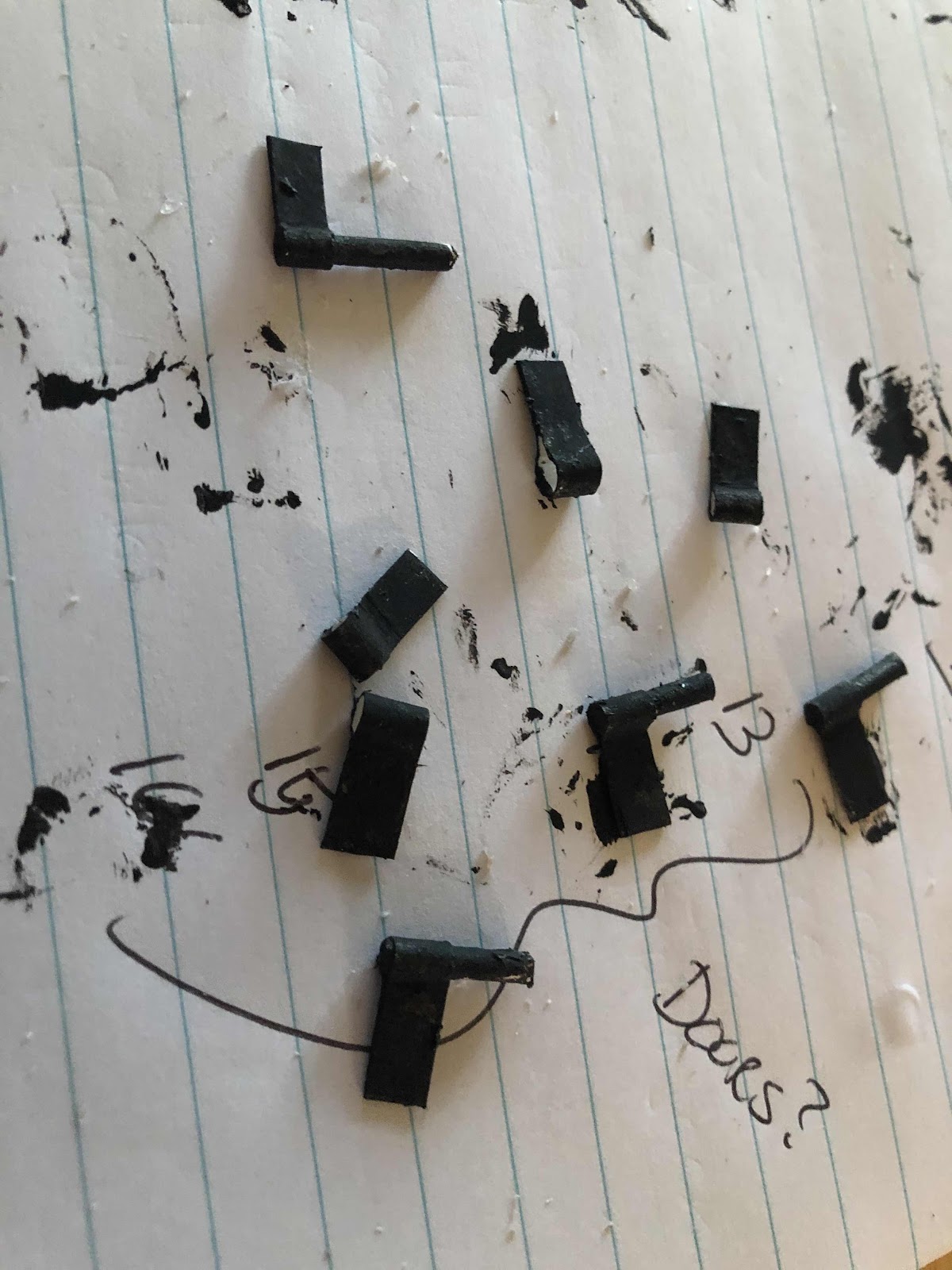 And finally it was time to hang the shutters. 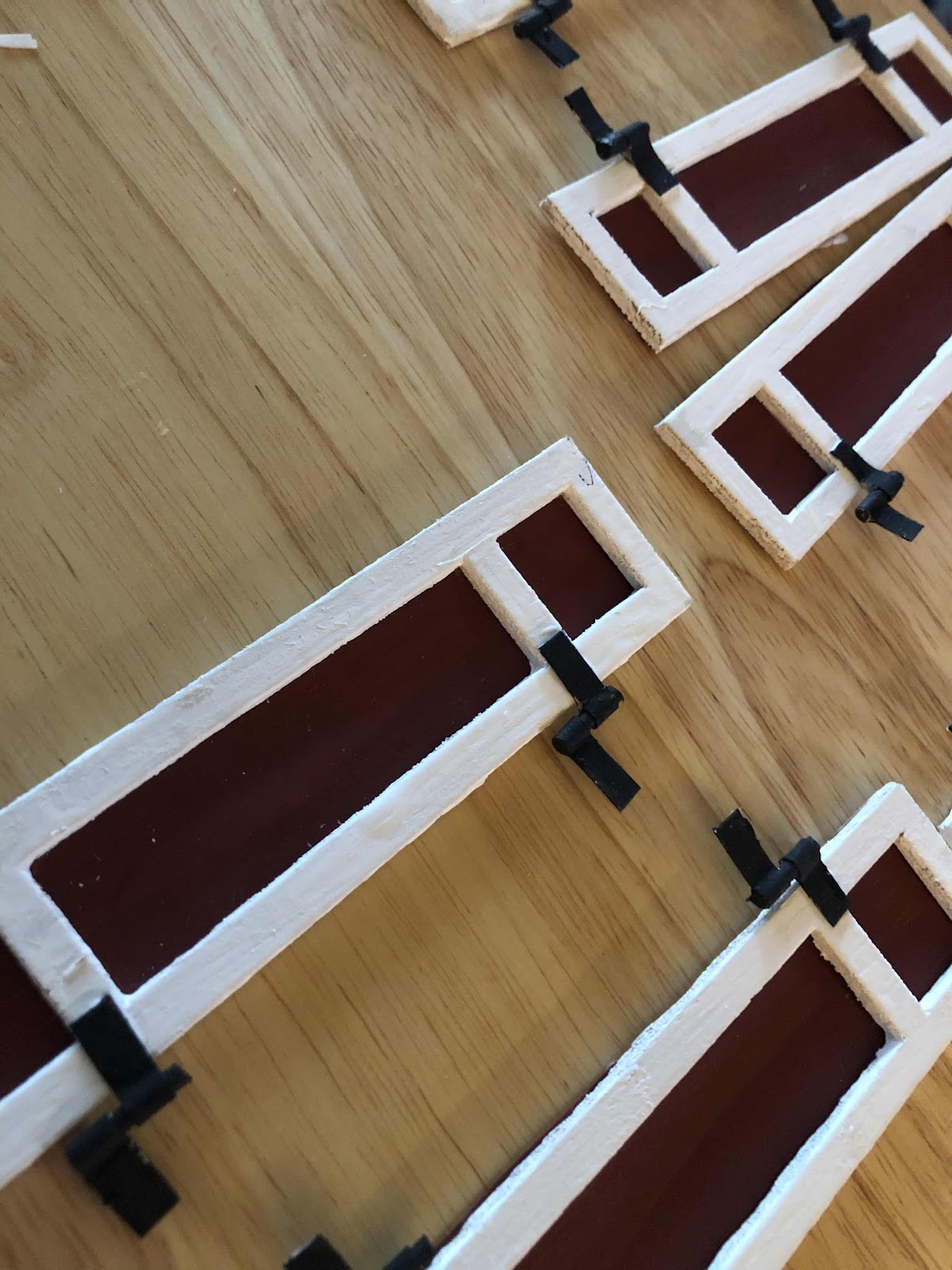 And boy was I giddy with excitement when I saw the finished project.  The hinges and three dimensional appearance makes it look SOO much more realistic!!!! 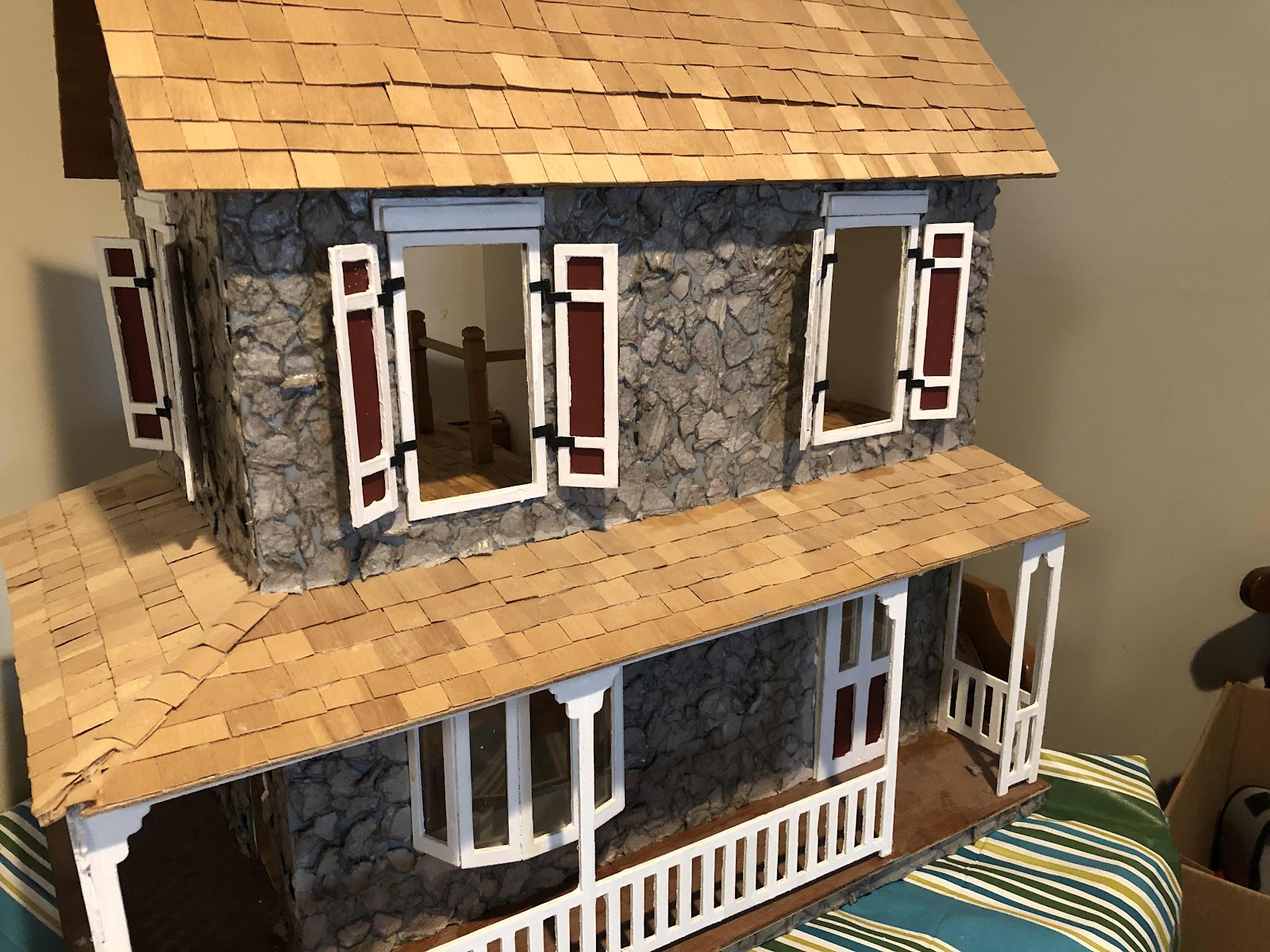 Wow.....what an update!  That is a whole lot of  miniature progress for one post!!!!! I laid, sanded and stained floor, installed a staircase, recreated some shutters, did some painting and made hinges and hung some shutters!   I am even more excited about the next steps.  I still have more trim to hang and then I will be able to start focusing on the interior......I have some ideas....
Posted by MaryFran at 2:00 AM No comments:

Bathroom fun in the McKinley by Greenleaf

Every house needs a bathroom and a miniature house is no different!   I had already decided to complete the McKinley house, by Greenleaf in the time frame of the 1950’s....give or take.   For that reason I was super excited when I found a little porcelain bathroom set at an antique shop.  Even better it was only five dollars!   I couldn’t wait to get home to put it into the house. 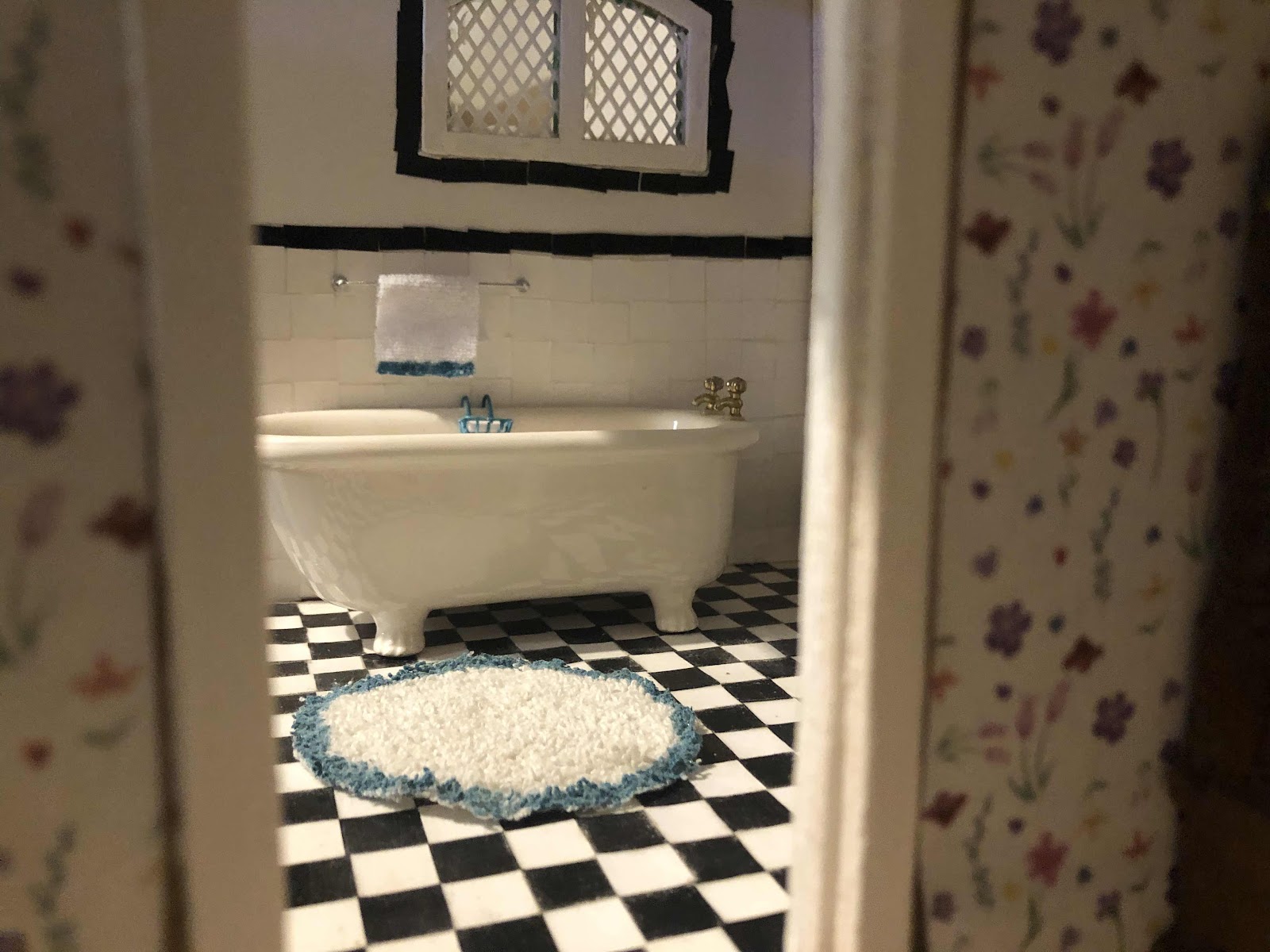 I experimented with a couple of different floor plans for the bathroom....it was a fun process. I really pondered!   And the best part?  It’s a dollhouse...if I don’t like it at a future date, I can easily change it up!! 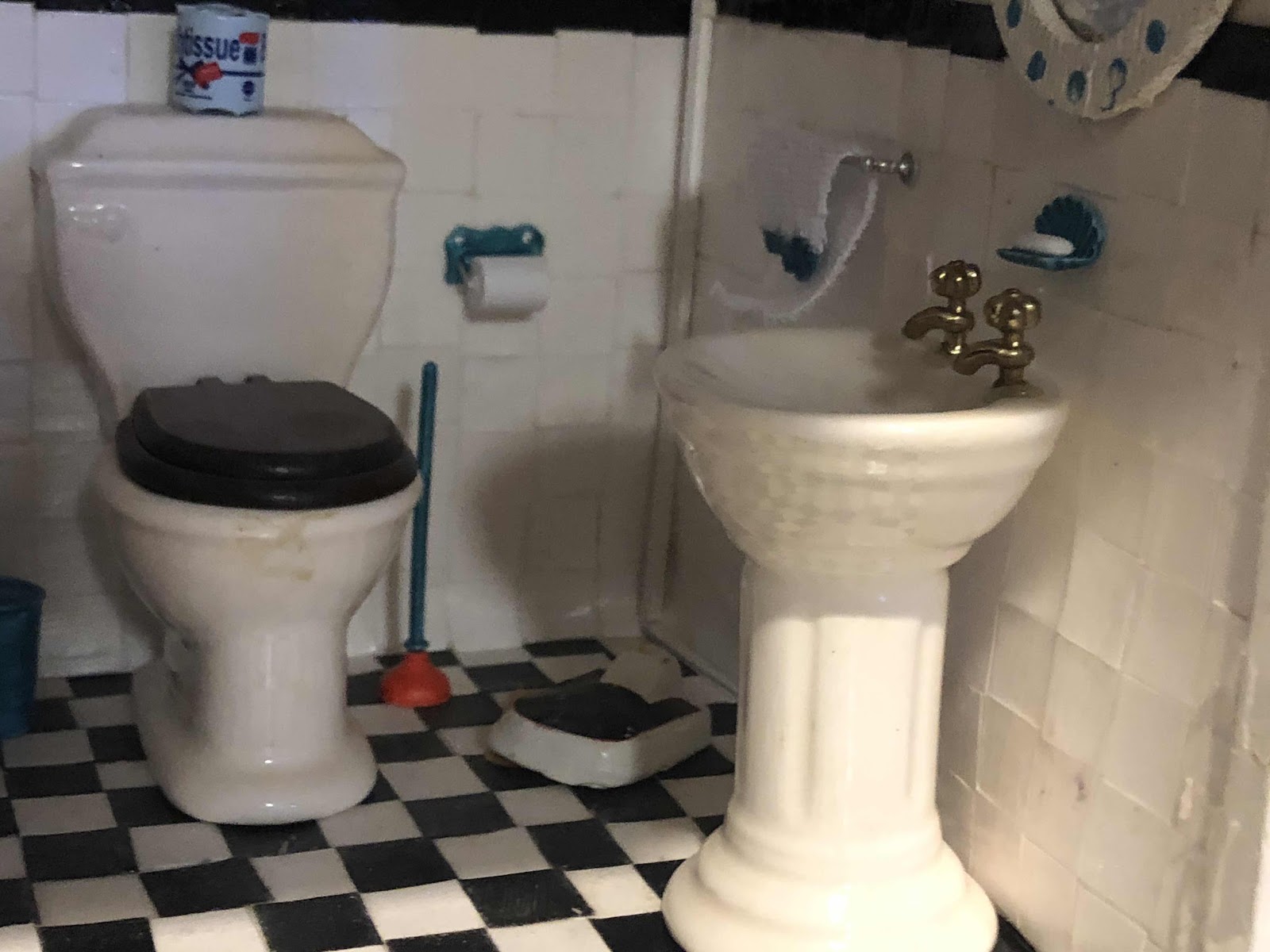 I have shared that the room was done...or rather mostly done here !
Two years passed and I still love the bathroom!  But i decided that it was time to do a video of the room!!   So here you go!!!

It is time to show off my kitchen......or at least the kitchen in the Greenleaf Mckinley miniature dollhouse!   How exciting to say that this room is mostly done!   It has undergone a huge shift since I began!

I wrote about my plans and progress on this dollhouse quite a long time ago in this post.   I was gung ho and loved what the kitchen was looking like. 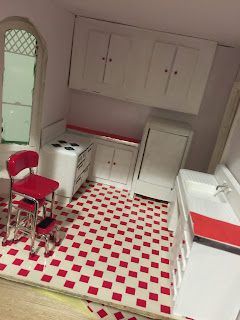 I was really happy.  The appliances and sink were great and vintage looking.  I was loving it.  But in the back of my mind I was always thinking, "it looks a bit 'play".   You see, my appliances WERE play items .....for the most part.  I wanted something more realistic!   So I splurged and bought a new kitchen set!!! 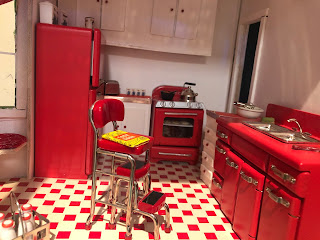 Ohhhh that made it absolutely perfect!   I put up some curtains and padded the window seat too!   Little touches that mean so much!

And I just started to add those little accessories that make the kitchen come to life!

The kitchen is NOT done.  I have to put up some pictures and maybe add more accessories as I come across things that I would like to add.  But this room is absolutely perfect in my eyes!  (for the moment!)

Posted by MaryFran at 2:00 AM No comments:

My very first dollhouse!   It was my childhood dollhouse that was carefully stored away until I was in my 40’s.   And that is when I pulled it out and actually realized my dream of completing an ‘adult’ dollhouse!
I set the era for this miniature dollhouse in the mid 1800’s.   It is a log cabin and essentially just a big room!   It was a natural for a rustic historic house! 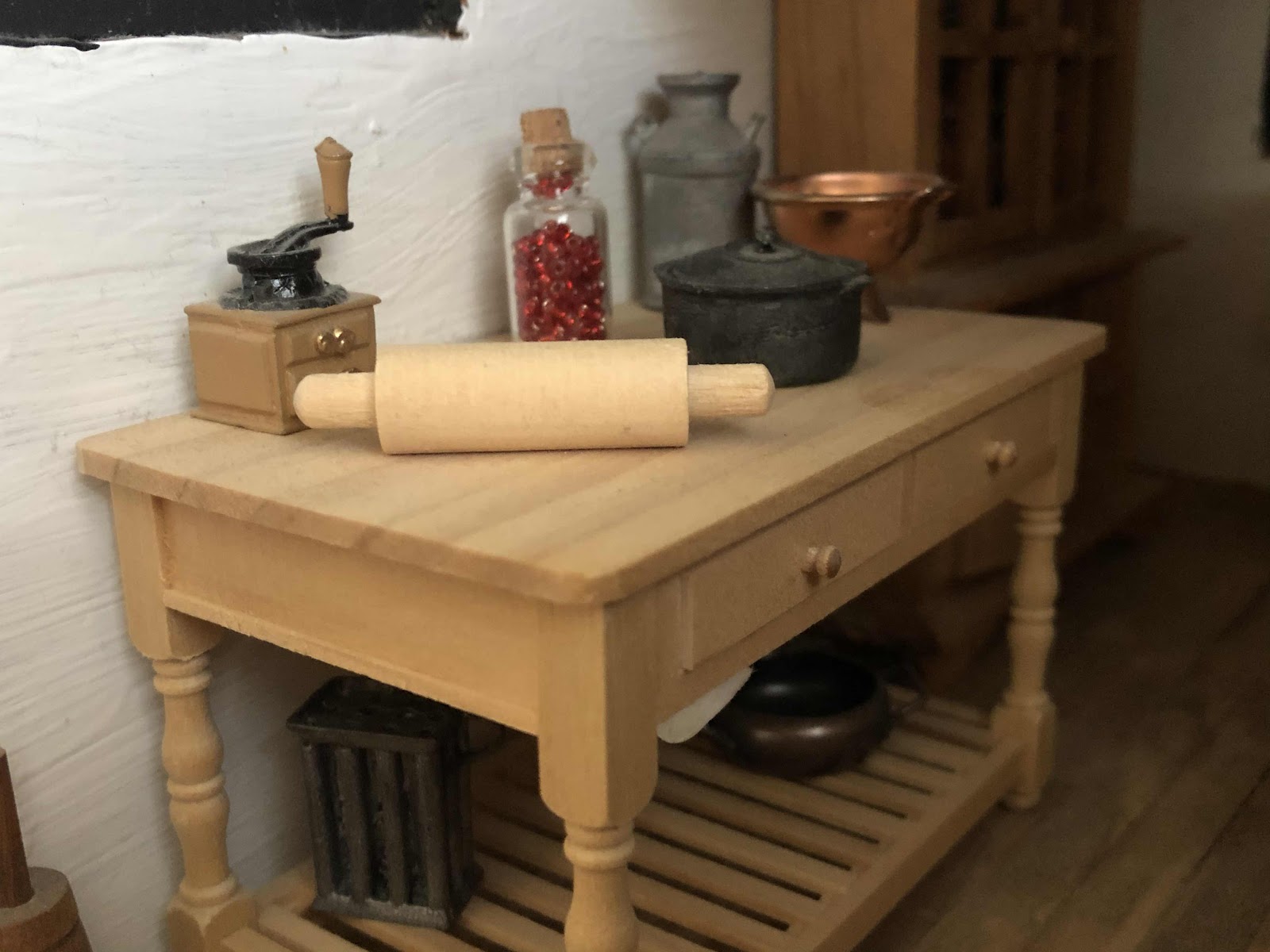 Ok, and some of my fascination with making this a mid 1800’s build could have been my childhood love of the Little House on the Prairie books!  I’m sure that is where and why I built a rope bed with a trundle bed!   Afterall, Mary and Laura Ingalls slept on a trundle bed in the Big Woods!!! 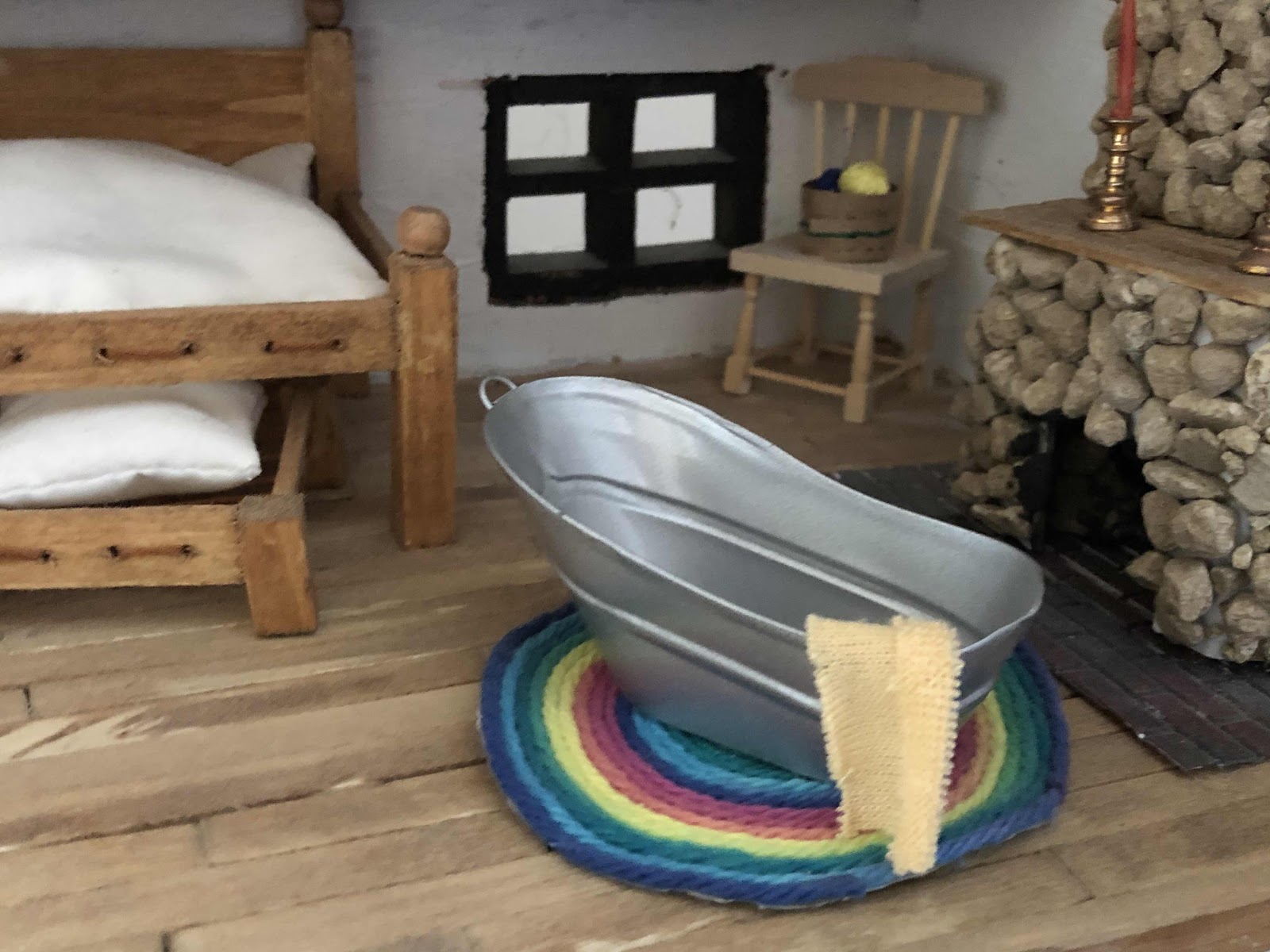 I had a great time with this build. I learned a lot and fell in love with the hobby!!

So let me give you the log cabin tour!

We were not sure what to expect when we headed out for a dollhouse store about an hour away from where we live.  I laughingly said ‘this might be a bust!’  But we were ready to explore and were happy taking a drive, even if the end result turned out to be a failure.
We followed the gps instructions to get to the shop and with each turn my heart sank.  This couldn’t be right.  There couldn’t be a store here!  And if there was, it was going to be one shelf of miniatures.  I was sure of it!   But undaunted we headed in.   We were ushered down the steps and the dollhouse lover in me gasped with delight! 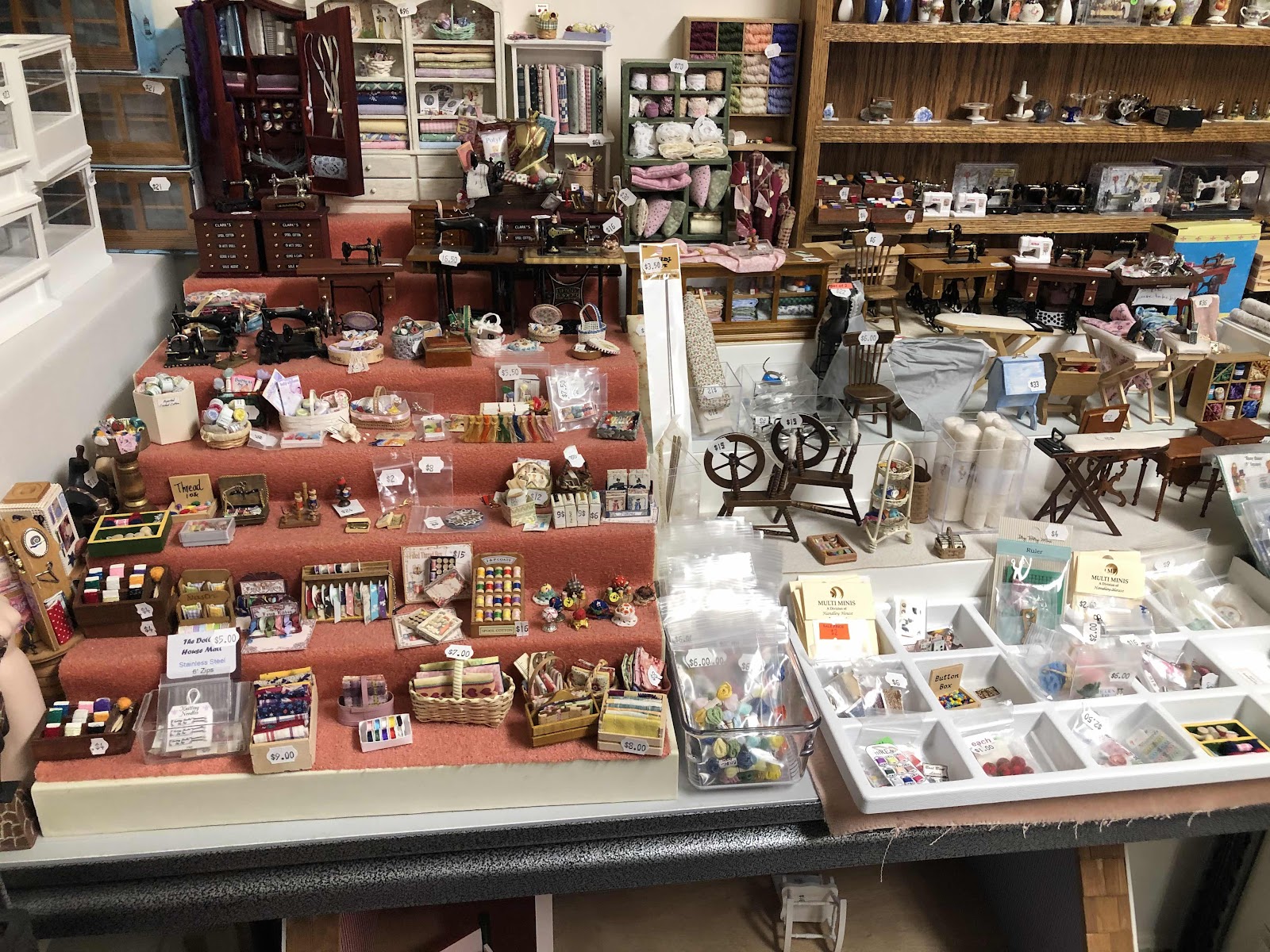 There were 3 1/2 rooms of dollhouse goodies!   Wall to wall.  Floor to ceiling!  I was in heaven!!!!!
There was everything imaginable! 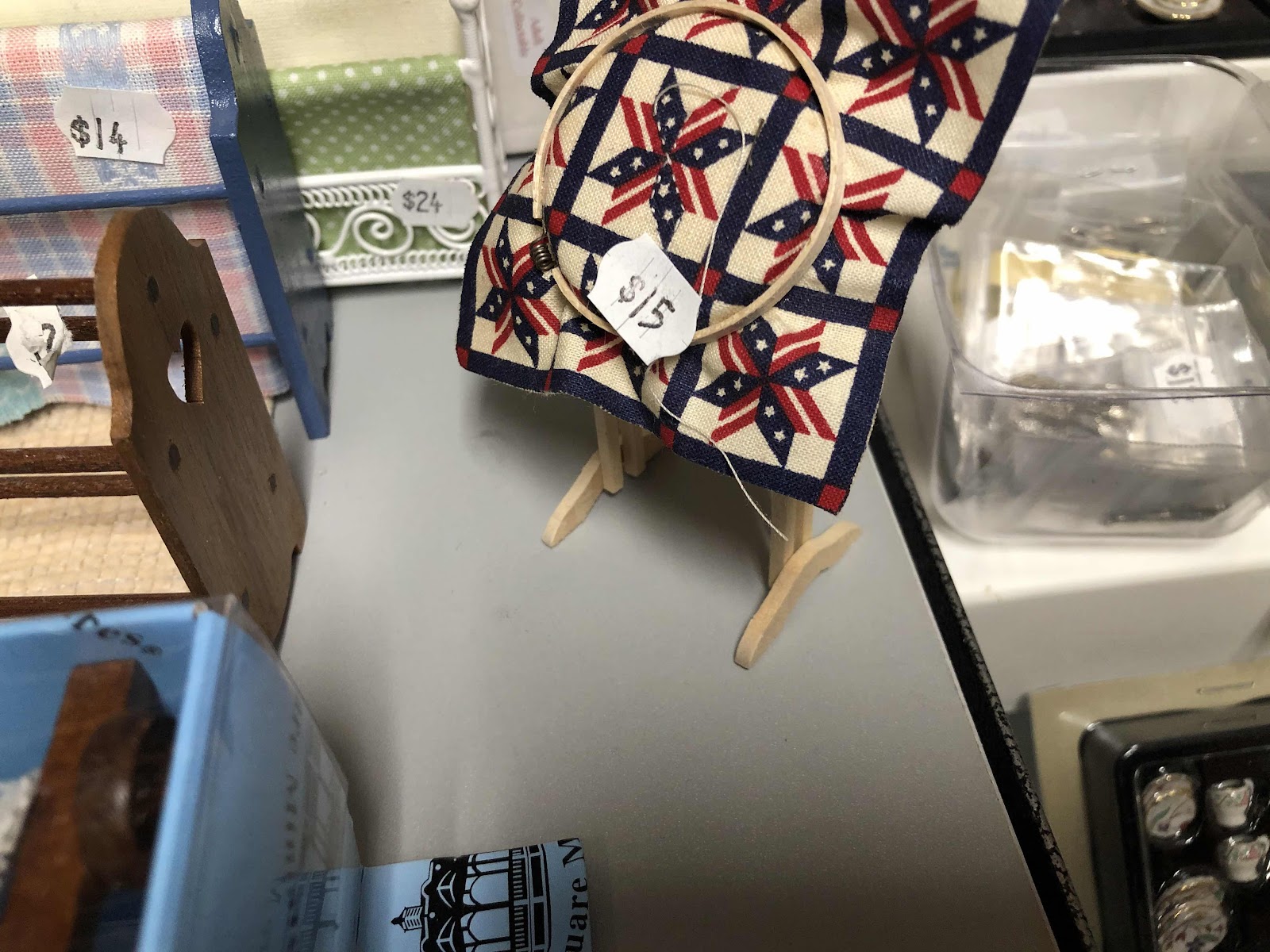 Of course I had to make a purchase...or two!
I already had the stool ..but I could have bought another one had I wanted it, she had them!!  But I bought the kitchen set!  (Amazon affiliate links) 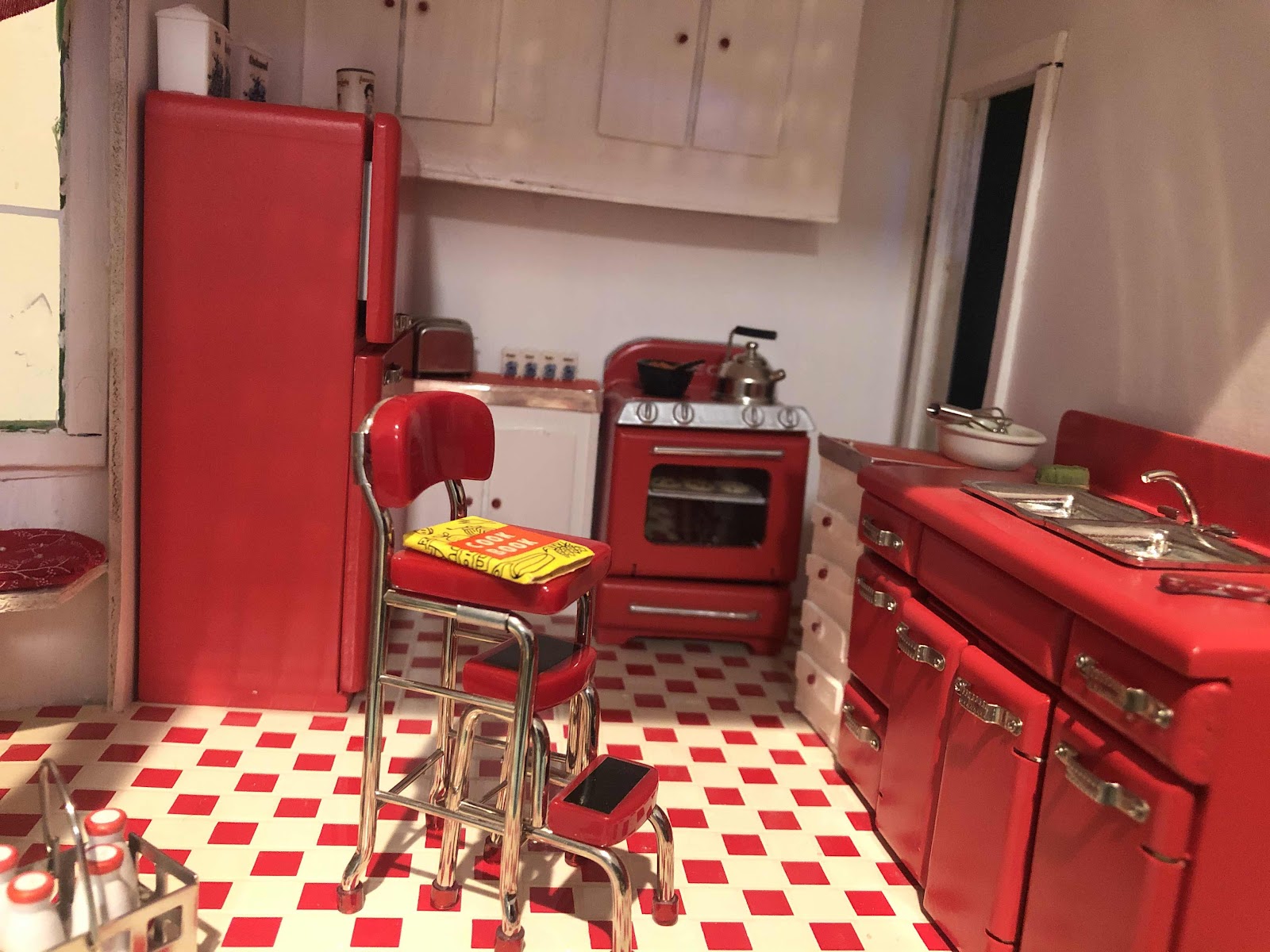 This store is definitely fun!  You can tell that the owner loves the hobby.   She was more than ready to assist and help me realize my dreams for my dollhouse.  But even better, she allowed me to browse, explore and ohh and ahhh over all of the delightful miniatures!
This store is amazing!   If you like miniatures....this place is for you!!!!  I will be back...time and time again I’m sure!!!
Posted by MaryFran at 5:31 PM No comments:

I have written about my experiences of putting together my very first dollhouse as I was working on the house.   It was a daunting task.   It was scary.  It was overwhelming.  It was a task that taught me incredible patience.   It was a joy and a pleasure to watch it come to life.  I will definitely be creating and building more in the future.   But right now, I want to reflect on the build!   So I have created a short video!

Life certainly got in the way of this build....of all of my dollhouse making schemes!  But I have done some work and made some additions in the past few months on some projects.  I am vowing to be more committed this year...and my hobby of dollhouses is one area.  I love it, and am vowing to not life get in the way again!

So what has been happening.  Let me break it down for you by current ongoing projects.

Stone House Quilts:
I got rolling on the stone for the Quilt shop and then a pinched nerve ended that task for a while.  I tried to wait it out, but eventually packed up the house for a while to let my body heal.   It eventually came back out though and in fits and starts I managed to complete the stone walls. 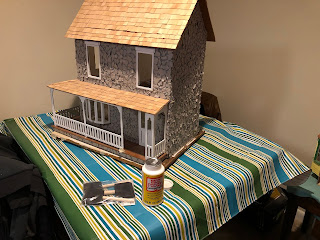 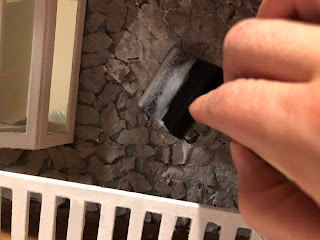 I also managed to get the interior painted!  It has been a SLOW process!   I am currently working on laying the 'hard wood' floor.

I am more than 3/4 of the way completed and I hope to start sanding this week!


The McKinley:
I tried to make a crib, but I was just not liking the way it turned out. 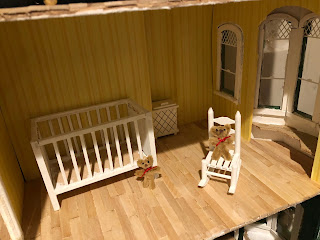 I haven't give up yet...but when I saw this crib in an antique shop...I couldn't resist! 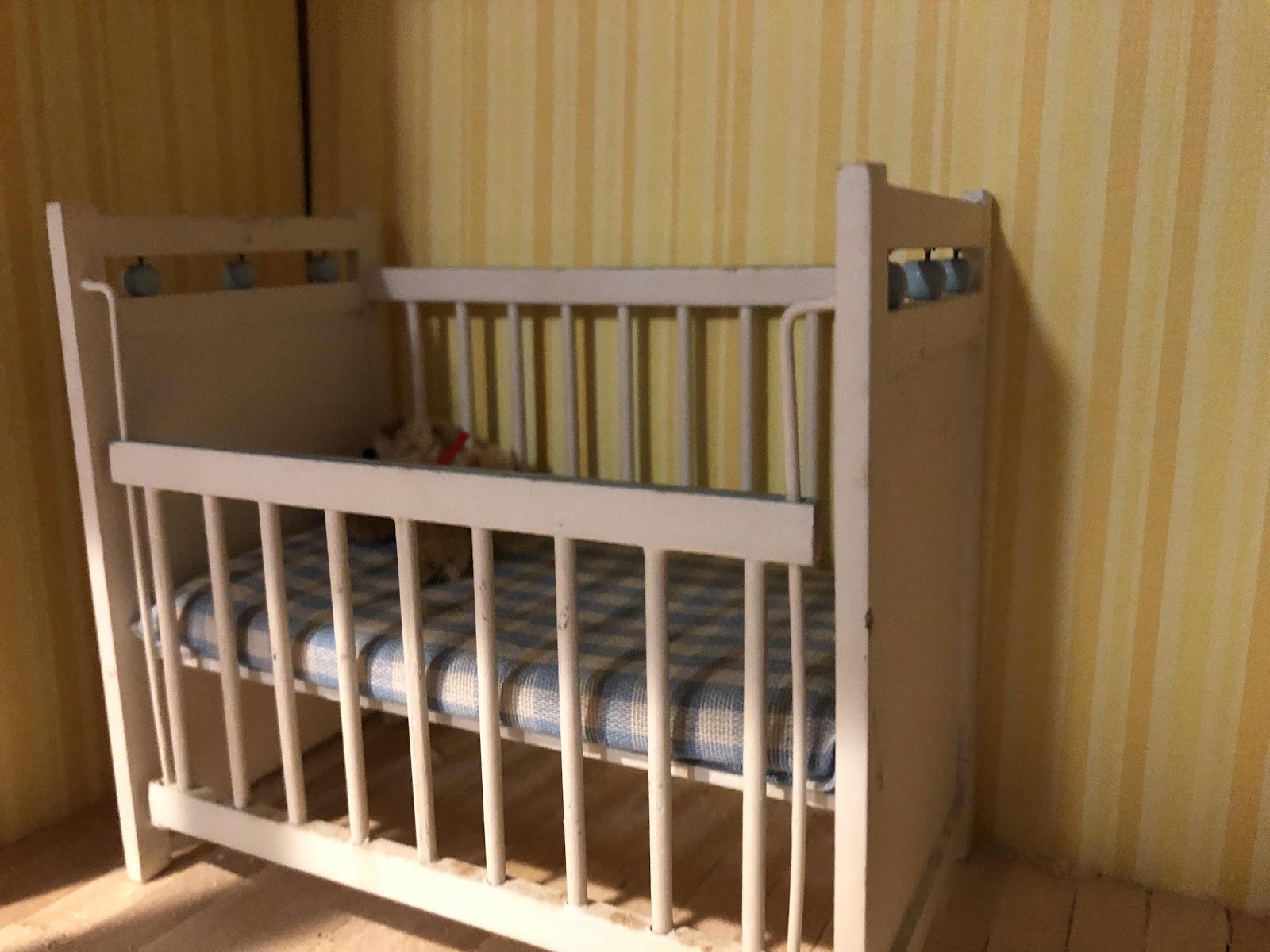 Jason gifted me with a fabulous piece for the upstairs hallway. I loved my Christmas gift!!!  And it fits perfectly! 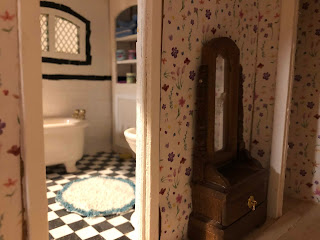 Ove my birthday weekend away, I found this set at an antique shop.  It is a bit more Victorian than I would like, but it is working nicely for the time being. 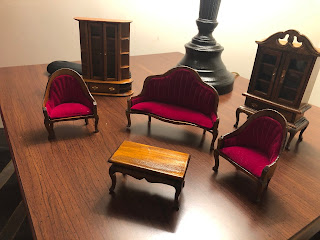 I am also working on creating some videos to complement this channel and to make a visual memory for me to document my work, my growth and my creativity.  I am constantly learning each day.  I can look at my Mckinley build from just a year or two ago and see things that I should have done to give it a more polished look.  That is the beauty of this hobby.....it is a place to constantly be learning!

Posted by MaryFran at 3:32 AM No comments:

MaryFran
I am pretty laid back. I enjoy reading, writing and working on my dollhouses. I love to talk to people (so shoot me a message!!). I’m in a serious committed relationship and I look forward to many more years with him! For that reason (and some others) I want to be the healthiest me possible!